A ‘flyover’ of the geology of the Isle of Ely

For a fascinating ‘flyover’ of the geology of the Fens, see this virtual tour around the Isle of Ely (using GeoVisionary software) produced by Cranfield University for us. 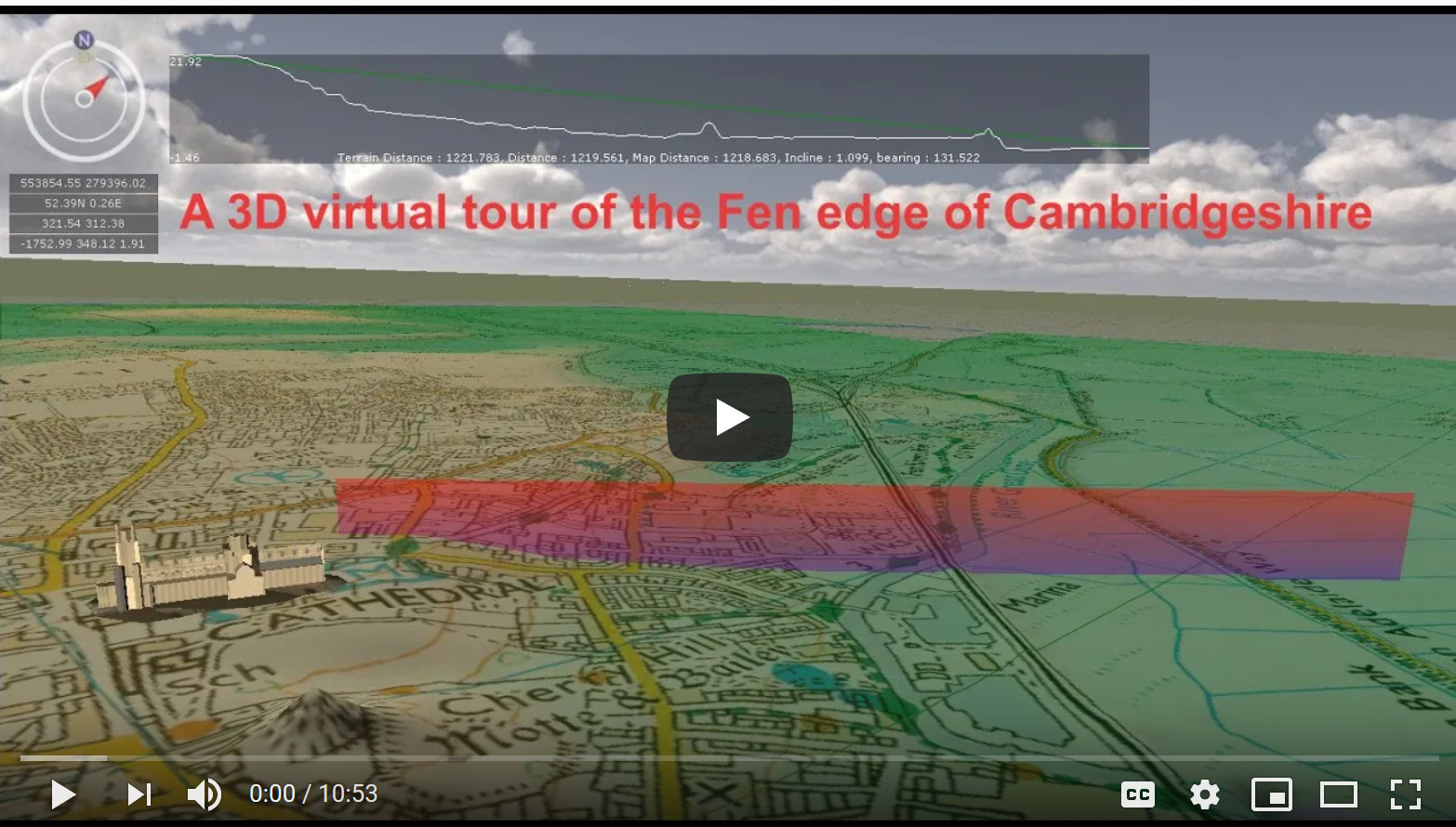 Understanding the geology of the Fen Edge (or anywhere else) needs a journey into the past to discover a fascinating series of changing environments over millions of years. The many different types of rock are fascinating and range from those that contain valuable gemstones to those that contain rare and important fossils and others that are made almost entirely of the remains of plants or animals (including the local Chalk and some limestones).

Traditionally, rocks and other geological material are classified by dividing them into two main types depending on when they were formed and this is particularly helpful in this area as the two are very distinct:

1. The ‘Superficial‘ deposits are material that has been left in the last (approx) 2.6 million years i.e. the Quaternary Period – known as the current ‘Ice Age‘ (although it includes warm intervals as we are experiencing now to an extreme degree). In this area this includes the Peat, Silts, River Terrace Gravels and glacial deposits such as Glacial Till (which used to be known as Boulder Clay).

2. The ‘Bedrock‘ is the general name for all the previous material – some of which can be relatively hard, such as limestone or sandstone, and some relatively soft such as the Oxford and Kimmeridge Clays. All of the bedrock at the surface in this area is Sedimentary rock (formed from particles of material that have been compacted) but underneath there are extensive bands of much harder, Igneous, rocks. These are formed when molten magma solidifies and forms crystalline rock, either during volcanic activity (at the surface) or plutonic intrusions (deeper down).

Obviously, through time, Superficial deposits (if they are not eroded away) will become Bedrock – an example is Peat which would gradually become compacted under pressure to form Coal. In many places, any Superficial deposits have been eroded and the Bedrock is at the surface whereas in others significant material still remains. The latter includes the large fenland areas covered by Silt or Peat and many of the hills on the fen edge that are covered in a thick layer of Glacial Till.

In geology maps (such as those produced by the British Geological Survey whose data we use in our maps), it is the surface geology that is shown but the online BGS Map Viewer also gives information on the underlying bedrock. The free BGS iGeology app also enables you to access the geology maps on your phone whilst out and about!

The Bedrock (the rock ‘underneath’)

Underlying the Cambridgeshire Fens, and sometimes showing at the surface, there are layers of rock (the ‘Bedrock’) that date back to  the Jurassic and Cretaceous Periods – a time famous for its dinosaurs and huge marine reptiles such as plesiosaurs, pliosaurs and ichthyosaurs as well as smaller creatures such as ammonites and belemnites, the fossils of which are well known.

In this region of England, due to tilting of the land during past ‘mountain-building’ periods, the Bedrock at the surface is generally youngest in the southeast and older in the northwest. To the northwest of Cambridgeshire are the oldest of the county’s rocks, dating from the Jurassic Period.  Their ages range from c. 169 to c. 152 million years (the Middle and Upper/Late Jurassic). The oldest are limestones (better known in Lincolnshire and Northamptonshire) such as the famous ‘Barnack’ limestone but they are mostly clays – the Kimmeridge Clay, Ampthill Clay and Oxford Clay (used extensively for brick making). There is also an outcrop of younger Jurassic limestone, the Upware limestone, near the southeastern edge of the Fens. The younger rocks, to the southeast are sandstones, clays and chalk and their ages range from c 125 to 93 million years (Cretaceous Period). They include rocks such as the Chalk, Gault Clay and Lower Greensand (Woburn Sands).

The Quaternary Period started about 2.6 million years ago with the onset of the Pleistocene glaciations. These deposits include Alluvium (from rivers), River Terrace gravels, marine Silt, Peat (formed in freshwater) and material left after the glaciations. The latter, includes Till, previously called boulder clay due to its general clayey nature (in this area), and glacial lake and  river deposits such as gravels. Some of the glacial deposits around the edge of the fenland may be up to about 460,000 years old (from the Anglian glaciation when ice extended south to the Thames Valley), but that in the fen basin is likely to be about 160,000 years old (from the Tottenhill glaciation when a tongue of ice extended down almost as far as Cambridge). The Peat, most of the Silt and the Alluvium are less than 11,700 years old (Holocene) and the river Alluvium is still being deposited, although in relatively small quantities. 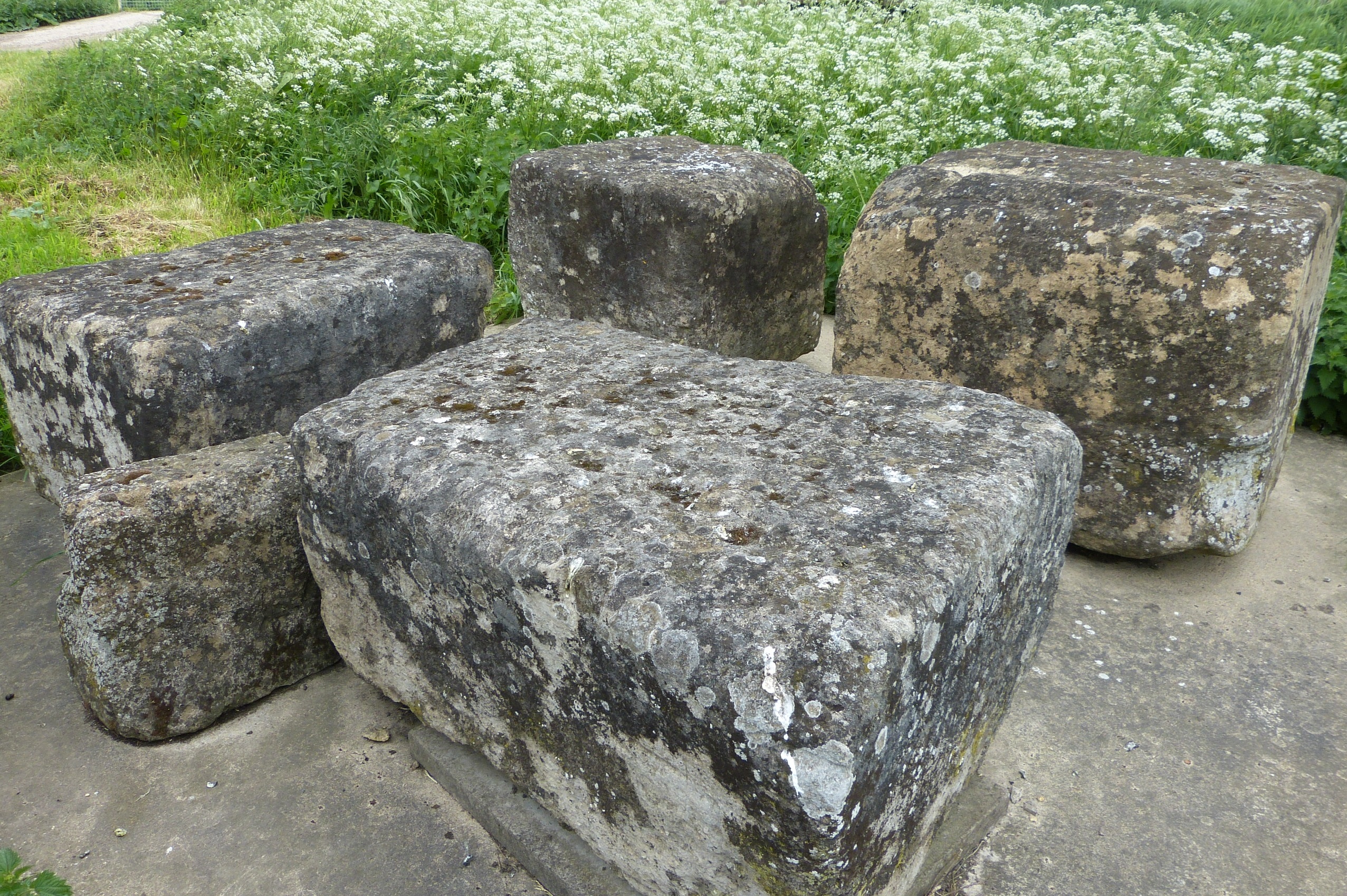 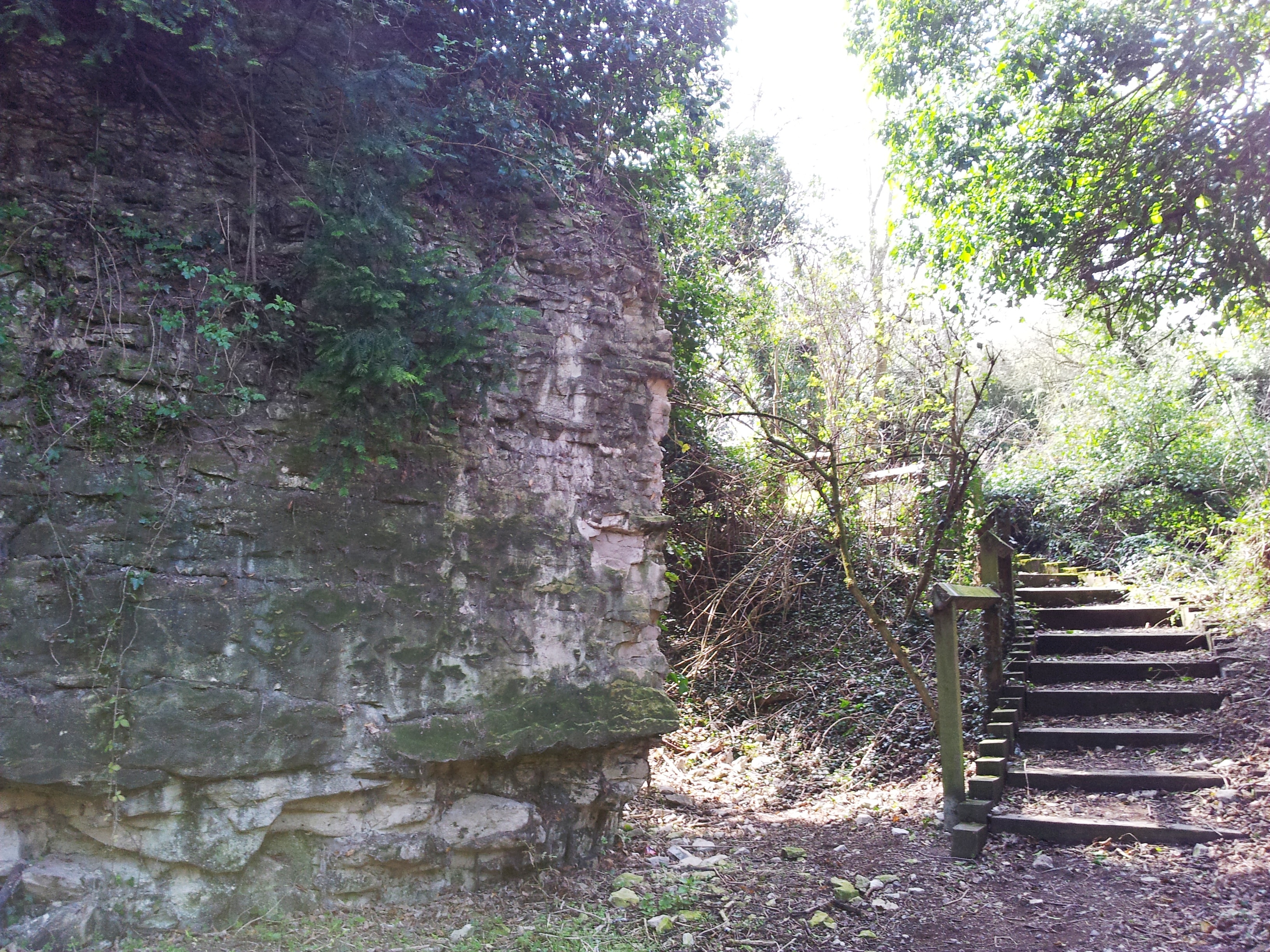 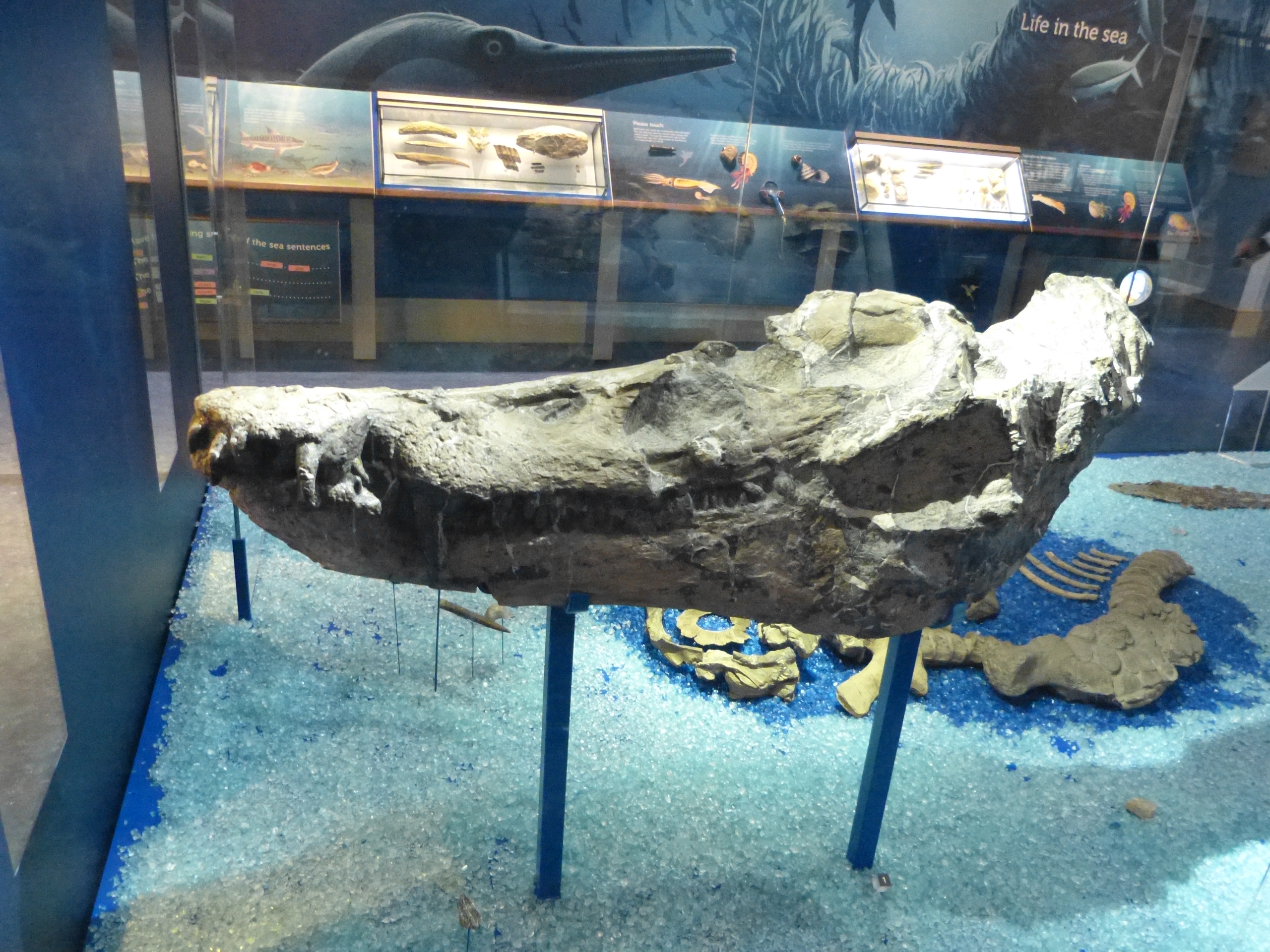 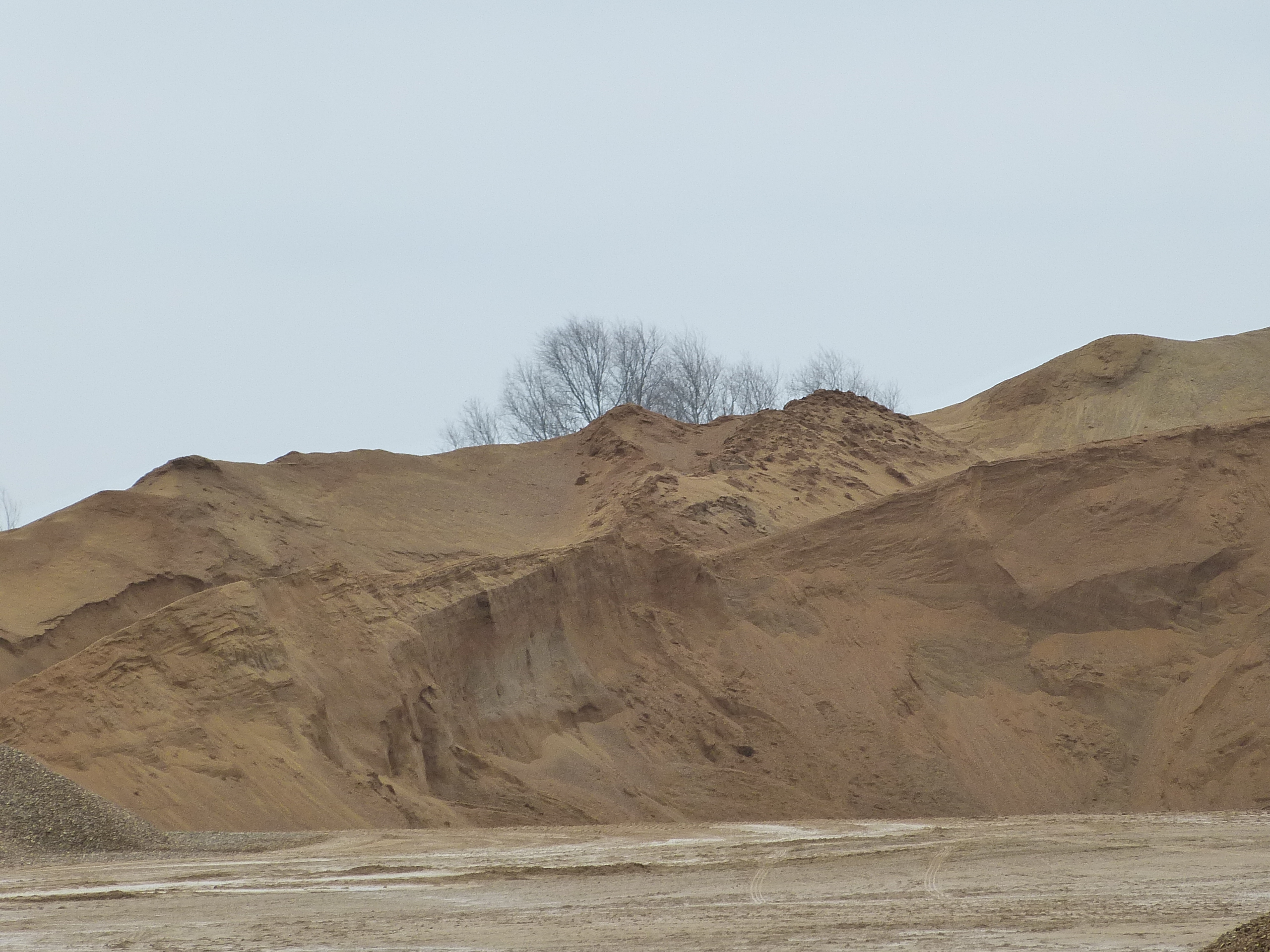 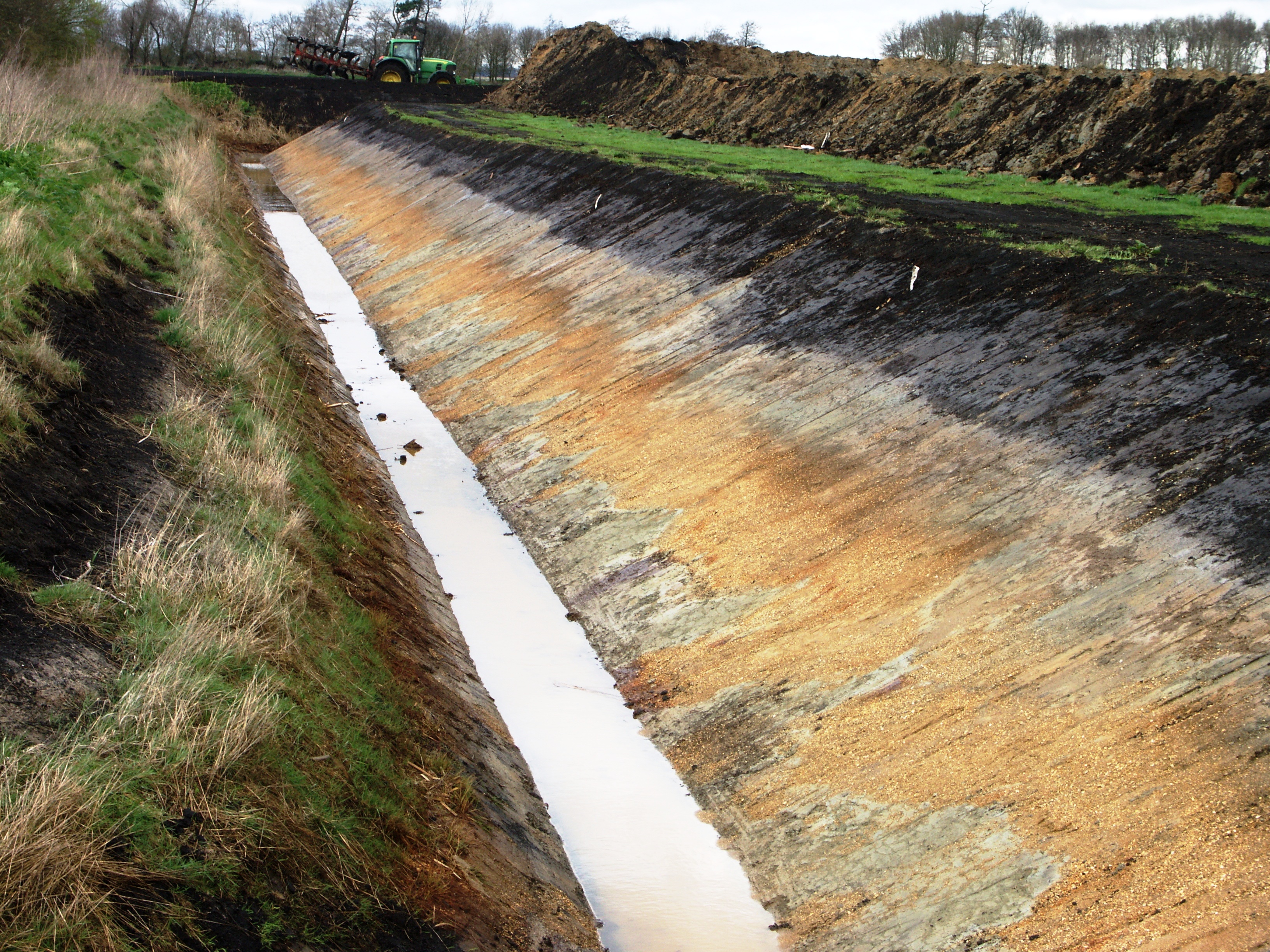 This map (containing data from the British Geological Survey) shows the basic geology of the area. It also includes the 5 metre contour (yellow) which is a line connecting the land that is 5 metres above sea level. The relationship between the geology and height of the land can be seen, particularly near the Fen Edge. For a key to the geology see the British Geological Survey map viewer.

The different colours represent the geological material that is at the surface today. The cream, brown, orange and blue areas are where relatively recent (‘Superficial’) deposits remain (and in some areas are still being formed). The light green band of bedrock running from the south to the east of the county shows the Cretaceous bedrock and the grey/dark brown/dark green/orange area to the northwest shows the Jurassic bedrock.

The different colours represent the geological material that is at the surface today. The cream, brown, orange and blue areas are where relatively recent (‘Superficial’) deposits remain (and in some areas are still being formed). The light green band of bedrock running from the south to the east of the county shows the Cretaceous bedrock and the grey/dark brown/dark green/orange area to the northwest shows the Jurassic bedrock.

For more information on the geology of Cambridgeshire see the 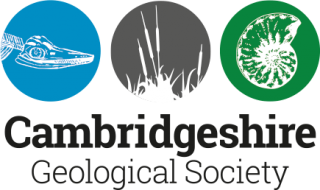 The leaflets for each walk include details on the local geology. 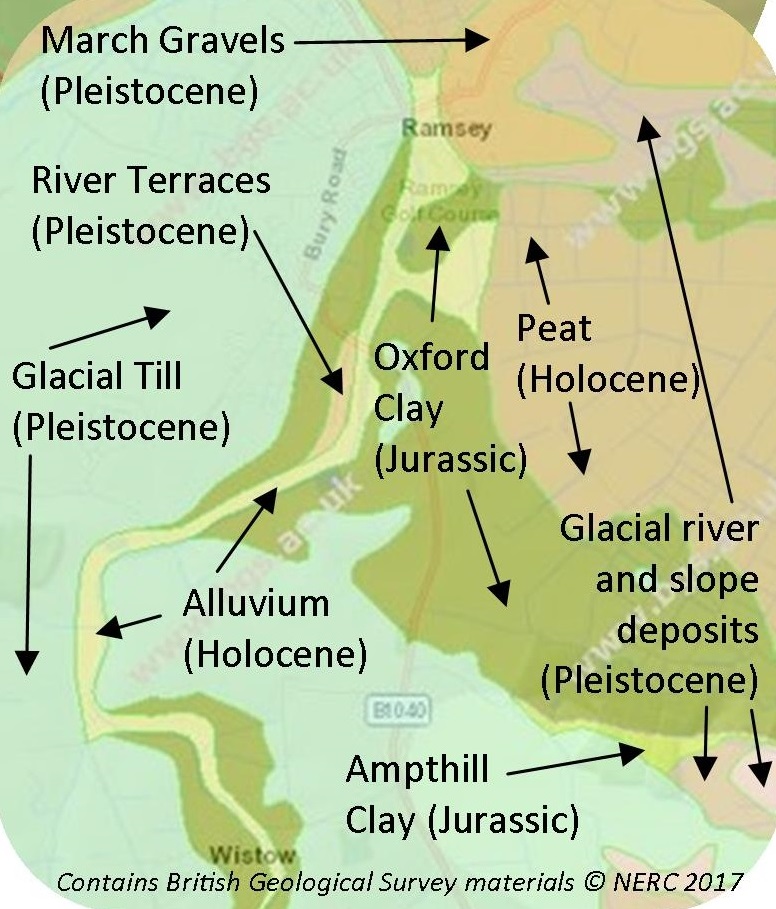 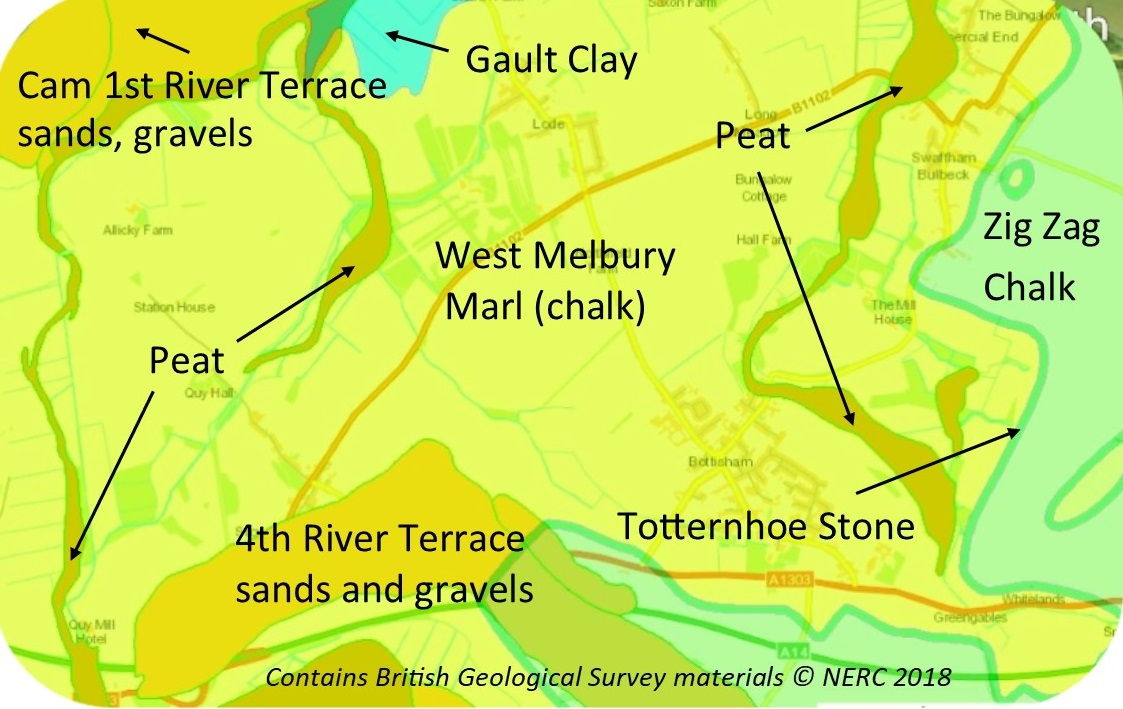